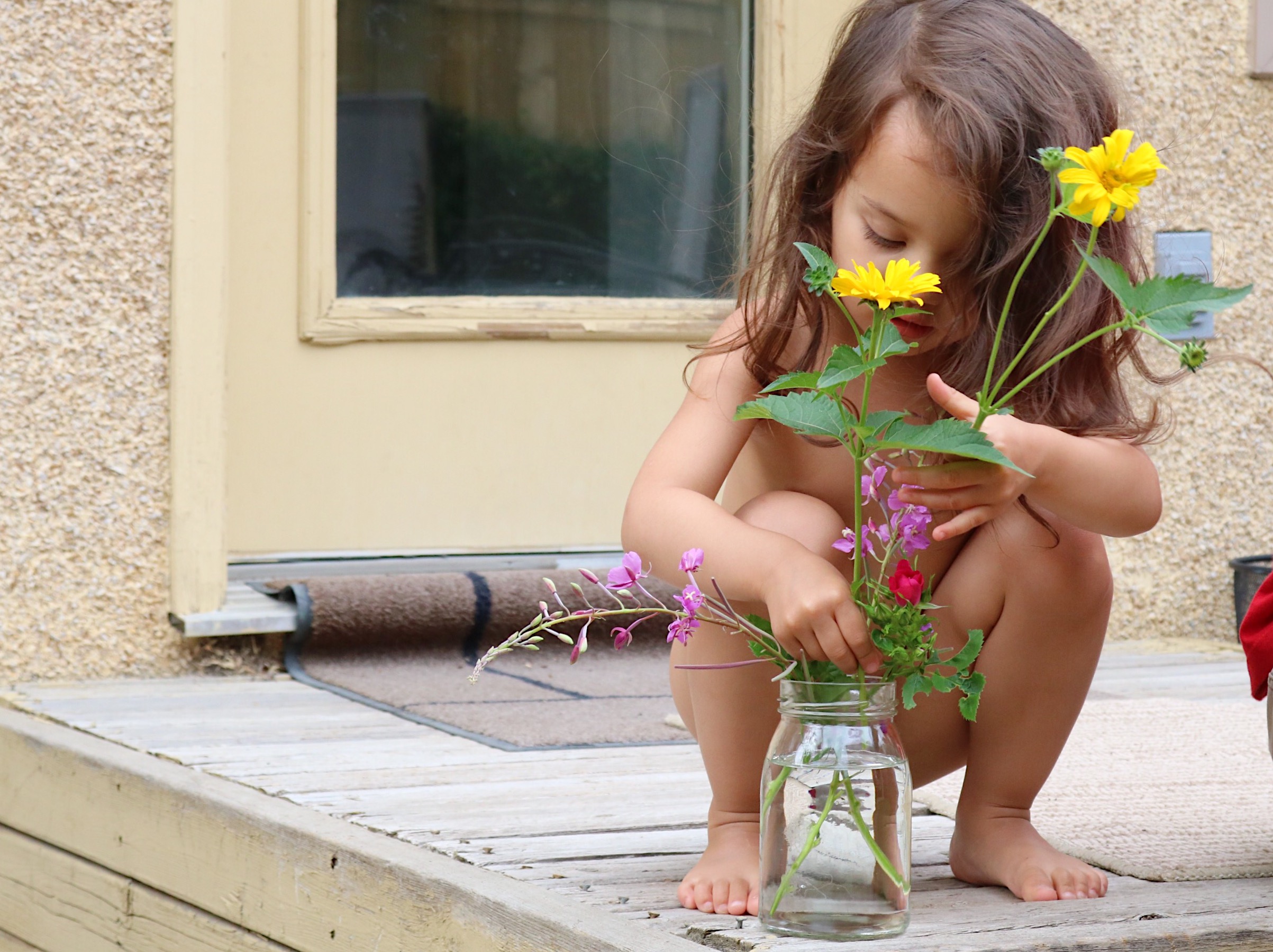 It’s been raining a lot the past couple of weeks, and you can tell the plants are happy for it.

Every year around this time, our backyard flowers begin to bloom, and making backyard bouquets is something I have fallen in love with. I am so grateful for the previous owners of our home – a couple who you could tell loved their yard – who laid down such a great foundation for our little backyard oasis.

As a lover of the simple things, making backyard bouquets is something that makes me so happy, and the kids have learnt to love it too.

Wearing their diapers and underwear, the perfect attire for a summer night in the backyard, we spend about 10 minutes creating our little piece of nature art.

I prune the flowers, and cut as many leaves from the stems as possible. If the leaves get stuck to each other when they are trying to put the flowers in the jar, the activity quickly becomes very frustrating for them and it will be over very soon – I’ve done it before haha.

Watching the process is wonderful.

Penelope is very proud of her arrangements, and in a very endearing way, is almost too protective of “her” project, which sometimes leads to her not wanting Oliver to even come close to her flowers. I love her sense of ownership in her craft though.

My Oliver is happy to watch and learn, and slowly learns to be gentle with the flowers as he caresses them while simultaneously saying “niiiiiceeee, niiiicceee”. He follows me and pretends to prune branches that he can reach, and whenever he gets close, tries to steal the pruners from me, ha.

The most beautiful part of these bouquets is, of course, seeing Penelope and Oliver continue to love and find wonder in doing the simplest of things.

And at the end, a beautiful bouquet to keep brightening our days.

The best kind of memories, I think, are the ones you remember when you hear a song, when you smell a certain smell, or from the sensation on your fingers as you run them through an embroidery a loved one made for you. Tangible memories.

During the holiday season, a time when tangible is a very common theme, especially with gift giving, the idea of creating tangible memories stuck with me. Finding a way to make tangible something that my children associate to an experience or memory, rather than a gift.

With this craft, I hope I am creating moments with my children that they will remember whenever they touch or see a pine branch.

The older Penelope gets, the more impressed I am by how well she is able to do crafts. On her own, she poured some flour and glitter onto a baking pan and mixed it. She was taking her craft very seriously, it was so endearing to watch. In the meantime, I cut a few pine branches and coated them with a thin layer of glue. She then pressed them against the flour mix and the result was quite beautiful. The flour mix creates a beautiful simulation of snow that looked quite magical. Once the glue dried, I grouped the branches into similar size lengths and by overlapping them, created the shape of a wreath. I secured the branches to one another using a hot glue gun, and mixed the greens with, and without the flour mix coat, together.

Once completed, I ran some ribbon through them, and they were ready to hang as decor for the holidays.

A fun and easy activity to do with the kids, and they turned out so beautiful! 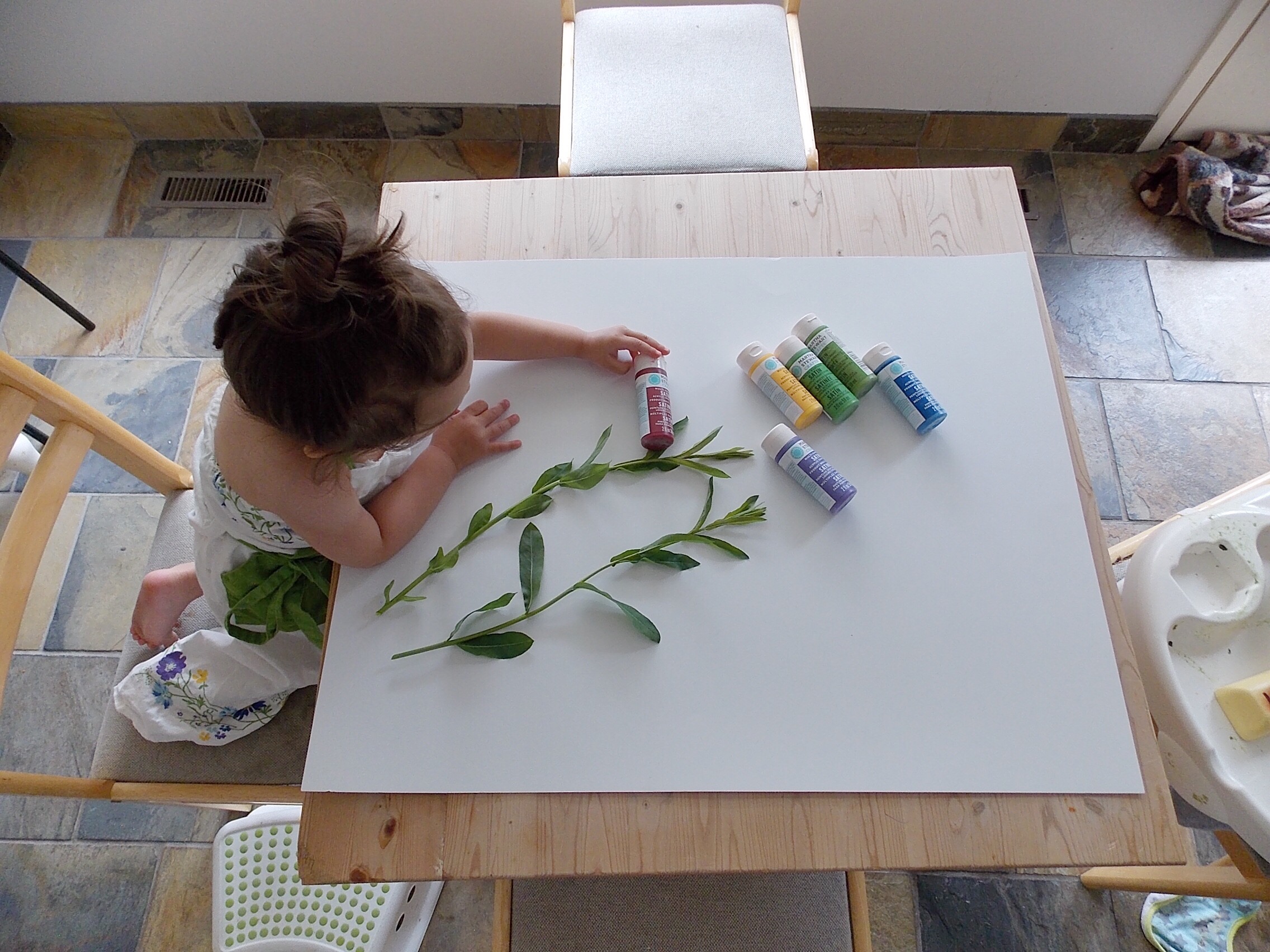 Whether it’s a hand written letter, a scarf you knitted yourself, or wall art you made with your children; there is something quite special about the handmade.

Directions: Squeeze paint onto various spots on the paper, and using the branch as a brush, let them explore.

The handmade isn’t instant, and in a world where everything moves so fast, and “time consuming” is a bad thing, not- instant is a great quality. Crafting takes time. There are steps, there is a process, and within that process, moments to practice patience and imagination as one stops and makes changes along the way. It offers moments to slow down and to experiment, again and again.

With a 2 year old and a 7 month old, “slowing down” sometimes seems impossible to achieve, ha! When we’re making crafts though, I see it. Using simple materials – branches, a large piece of paper, and paint – the kids are happy and entertained for 15 -20 minutes. Penelope experiments in the ways she moves the branch to mix the colors, and in the process, the most beautiful textures and color made. Oliver still quite young, finds more wonder in the branch itself, examining the leaves, and trying to eat them, ha! Perhaps I’m a little biased (I have a Fine Arts degree), but I hope my children find making things with their hands therapeutic like I do, and if not, that they remember the moments we sat down around our kitchen table, creating moments to enjoy the process of making things, of spending time together, of slowing down, and of creating beautiful things with our hands.

Penelope is potty trained! It’s been a little over a week since we said bye-bye to diapers. She picked her underwear (paw patrol and frozen theme won), her step stool, and the little seat that goes over the toilet. The experience was pretty painless, and I would even go as far as saying it was fun! They say girls are easier to potty train than boys, so we’ll see if I say the same when the time comes for Oliver, ha! It did feel like a very long couple of days, but I think it’s because we had to stay in all day, and we’re not used to that. The first three days were the hardest, but now it’s wonderful! We have even been able to do long-ish outings with only one accident so far. I’m proud of her.

There is quite a bit of humor in potty training. When your husband texts you a picture of two little turds on the kitchen floor that didn’t quite make it to their final destination. When you realize how quickly you move when you have to run your toddler to the toilet before the stream ends (haha), or when your toddler claps and congratulates YOU for successfully going to the toilet, ha! Oh, parenthood.

Penelope is 23 months old, but she was ready, and it showed in how quickly she caught on. It’s a bitter sweet feeling. I don’t have to carry her onto the changing table anymore, and my back is thankful for that, but my heart does break a little when I see her in her big girl underwear. Every day, she is less baby, and more little girl.

My nephew was over a few days during her potty training, and it was wonderful. It helped to break up the day, and it was a positive distraction for Penelope. With the winter lingering, I decided to bring the spring indoors, and do a little repotting activity with them while Oliver napped. I imagined it would be a very messy activity to do with two toddlers, but I was already in the midst of potty training, so really, how much messier could things get?! (haha).

They surprised me. Perhaps they felt very autonomous and responsible in their doo-ties (too much potty training haha), but they took it very seriously! Look at their faces, ha! I had very little cleaning to do afterwards, and they ended up being great helpers.

A little dirt, a little pee…. a little poo (haha) never hurt anyone. So whether it’s potty training or potting plants, it’s OK to get a little dirty – all worth it in the end.